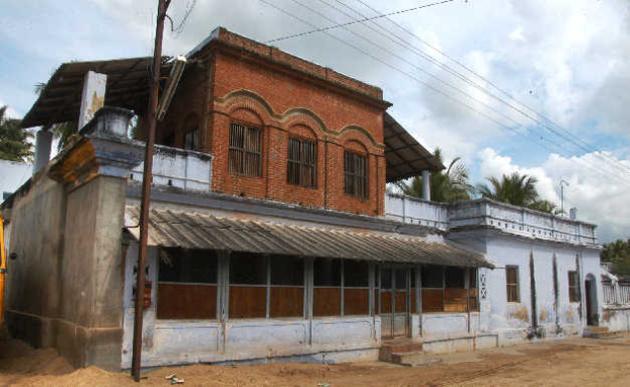 (Photo – taken by me several years back)

The village, where Sri Chandrasekharendra Saraswati underwent tutelage, is a pilgrim spot

Mahendramangalam, a small village, two km from Thottiyam in Tiruchi district, gains significance from the fact that the 68th head of Sri Kanchi Kamakoti Pitam, Sri Chandrasekharendra Saraswati, spent three years here to study various subjects. It was under extraordinary circumstances that 13-year old Swaminathan became a sanyasi, the mantle falling on him, when he was least prepared for it. That was in 1907. How he rose to become one of the most revered spiritual leaders, worshipped by millions of devotees, is history.

The position of Pitadipati inevitably brought in its wake attention, which came in the way of the young swami’s education. The senior administrators of the Math decided to move him to the quiet Mahendramangalam, on the banks of the Cauvery. It is recalled that in order to reach the village, one had to alight at Lalapet railway station, the nearest railhead, and cross the river in a coracle.

A hermitage was created close to the river bank, for his study and meditation. Puja and administration took place in the agraharam. In the three years — 1911-13 — Sri Chandrasekharendra Saraswati learnt, apart from a host of other subjects, Vyakaranam (grammar), Tharkam (logic) and Vedanta. He also studied Mimamsa. The village turned out to be a sacred pilgrimage place for the popular leaders of the country and famous scholars too.

In memory of his stay at Mahendramangalam, a temple for Adi Sankara was constructed, when the pontiff was barely 20 years old. Even today at that temple consecrated by him, the rituals are being conducted under the care of Kanchi Math. The idol of Mahaperiyava, as the Acharya was referred to was installed on September 12, 2010. A Yajur Veda Patasala in the Gurukulam model is functioning in the house, where he stayed and performed puja for three months. Many years ago, when the land belonging to the Kanchi Kamakoti Math was levelled, a Siva lingam and stone inscriptions were unearthed. The Archaeological department confirmed that the lingam belonged to the Mahendra Pallava period and was worshipped by Sri Chandrasekara Saraswati.

Sri Kamakoti Seva Samithi Trust was created by the Kanchi Acharyas, Sri Jayendra Saraswati and Sri Vijayendra Saraswati to raise a temple for Sri Chandramouleeswara and Sri Tripurasundari. The team included Y.Prabhu, (Management Trustee), Jayaramakrishnan (VPTCS), Kamakoti (CUB-CMD) and Subramania Sastrigal of the Math. Work, estimated at ₹90 lakhs, commenced on the construction of the Siva temple and the renovation of Adi Sankara temple. Maha Mandapam, Ardha Mandapam and separate shrines for the main deities and parivara deities have been constructed. The Adi Sankara temple is ready but for work valued at ₹30 lakhs.

The Trust looks forward to contributions from devotees and philanthropists so that work could be completed and the consecration can happen as scheduled in the Tamil month of Karthigai (November-December).