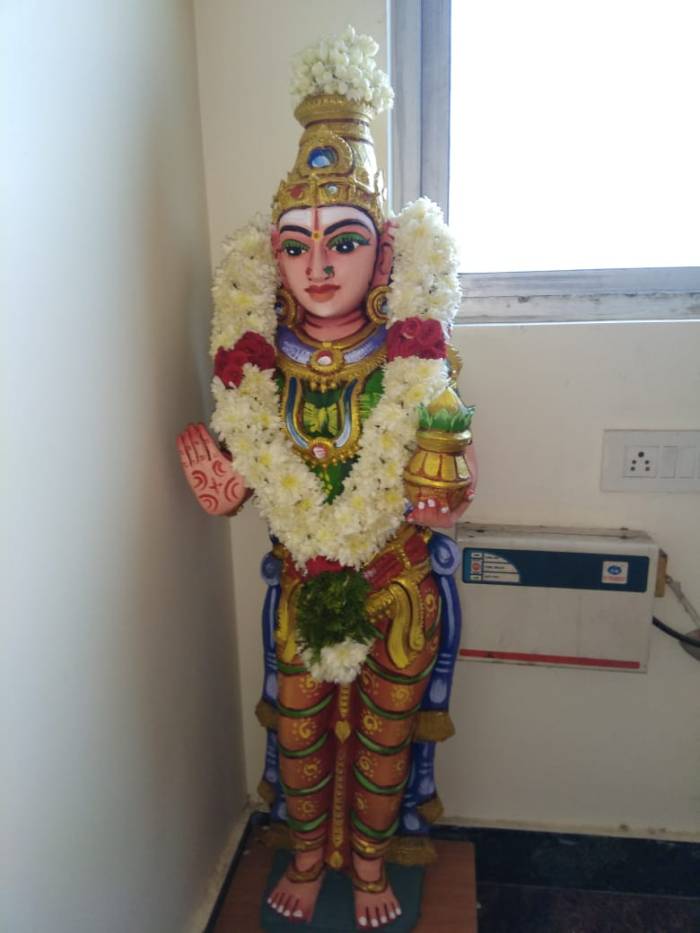 Many Jaya Jaya Sankara to Smt. Mahalakshmi Mami for the share. Rama Rama

King Daksha Prajapathi was a noble king. He had a daughter, Dakshyani. Once Dakshyani commits a sin and Lord Shiva gets very angry. To rectify, the King performs a yagam.

It is said that Dakshyani was reborn as Parvathi, as the daughter Himavan (mountain king). Sheprays to Goddess Parashakthi as she wants to marry Lord Shiva. Goddess Parashakthi is pleasedwith her devotion and blesses Parvathi that her wish will be fulfilled and also gives her a lotus garland and says, with this garland all auspicious things will happen to the world. All arrangements are being made for the marriage of Parvathi to Lord Shiva.

Sage Agasthyar with HIS consort Lopamudra arrive to the wedding. All the Devas, Sages andeveryone assemble on the northern side to witness the celestial wedding. The earth could not hold the weight on the northern side and starts to tilt. The southern side moves up. Lord Shiva askes Sage Agasthyar and Lopamudra to go to the southern side and blesses them that they will be able to see the celestial marriage of Parvathi to Lord Shiva. The lotus garland given by Goddess Parashakthi to Parvathi was used in the garland exchange. Lord Shiva takes the lotus garland from HIS neck and hands it to Sage Agasthyar . The garland transforms into a beautiful girl and was named Thamirabarani because of her colour and lotus flower.

Lord Shiva blesses her that at an appropriate time she will change into river Thamirabarani andgood things will happen and asked Sage Agasthyar to take her with him. Sage Agasthyar goes toPodigai mountain with Thamirabarani . She becomes a river, originating from Podigai mountain (Gupta Sriragam cave). She flows for a long distance with the names Poorva Vahini and Uthara Vahini until she reaches northern Thiruchendur (Jayanthipuram), where she divides into three and flows as three holy rivers in holy places, where there are many Shiva and Vishnu temples, particularly Nava Kailasam and Nava Thirupathi.

Special feature of Thamirabarani is that Namazhvar’s body came out of this river. It originates and joins the ocean in the same district.

It is recommended that people belonging to Kanya, Mithuna, Vrichigam, Mesha, Danusu and Meena Rasi’s must perform pariharams during this pushkaram. It is emphasized that one should take a dip in the river Thamirabarani and offer Dhanam (donate) as per one’s ability.