Thanks to Shri Rathnam for this article.

I had the fortune of meeting Brahmasri Late Parasuramachar few years back…..Read this post – outstanding family background of nithya agnihotri and one of the bests interviews…. 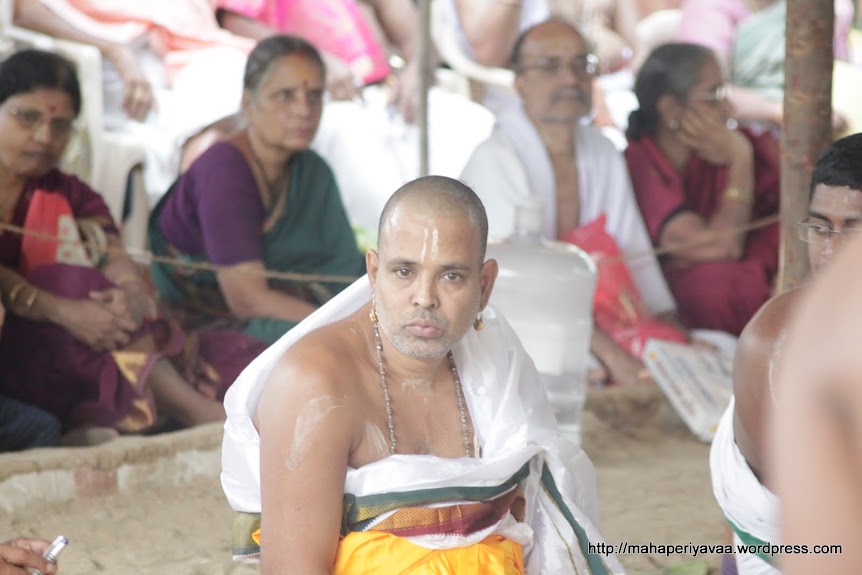 Sri Padmanabhachar, a Madhva was traveling from Kolkata to Chennai with break journey at Vijayawada. It was 1969-70. Traveling with his pregnant wife & his son Sri Parusuramachar. They got down at Vijayawada after long & heavy journey from Kolkata. Thought of going to the Kamakoti Mutt there for preparing their swayambagam. Before that they got into the Krishnaveni river. After the bath when they came out, they were curious to see when crossing the river bridge in the  train that…

Yup! That is what he saw!! Sort of curious – Yes! It is Periyava who was taking snanam in Krishna river here in Vijayawada… What a surprise! They’ve got a break journey and have to leave by 3pm from Vijayawada but wanted Periyava Darshan. So they  went to Periyava Darshan.

Periyava who was in the sadas, hundreds of devotees crowded, looked at Sri Padmanabachar, called him nearer.

“I would tell you something, would you listen?”

Sri Annadurai Iyengar & few others are there were bit surprised, as Sri Padmanabachar was posted in Veda Bhavan, Kolkata and not sure why he has come down to South suddenly with his family.

Periyava, “Baghawan has given us two flowers – happiness and sorrow. Samarpan both at His holy feet. You do not have any connection with them!”

13 days prior to this, the eldest son of Sri Padmanabachar met with a bus/tram accident, where Trams that hit his son, never stopped in Kolkata & passed away. Sri Triplicane Periyava used to say that the most painful ‘sokam’ is ‘Puthra Sokam’!

Sri Padmanabachar has deciced to leave Kolkata and come to South once for all. Out of pain, he didn’t inform anyone. Anyone!

Exactly after tenth day he moved. With his family with a break journey at Vijayawada.

Periyava says, “Baghawan has given us two flowers – happiness and sorrow. Samarpan both at His holy feet. You do not have any connection with them!”

Later, when his younger son had heart problem with blood oozing out of nose with severe pain in heart and with one leg & arm paralyzed, he was admitted to hospital. Dr Solomon Victor was advising immediate heart surgery as the situation is serious. Sri Padmanabachar came to Periyava.

Periyava, “No need to do surgery. There is something called “Vayu Stuthi” – Ask him to chant daily. In veda there is one sutham called “Unja vikkatha suktham” – ask him to do nithya homam using that suktham…nothing will happen to him”

He is a famous surgeon in that region &  it is a Government Hospital, so no incentives for additional surgery. He was advising purely for patient’s benefit, according to his medical knowledge…

Already one son has gone & here the second one is serious but… for Sri Padmanabachar what Periyava has to be followed! Who can do this?! Isn’t it amazing?

Sri Parasuramachar who was son not only followed what Periyava said but also went on to succeed Sri Padmanabachar & became the incharge of their Sirugamani Vedapatasala!